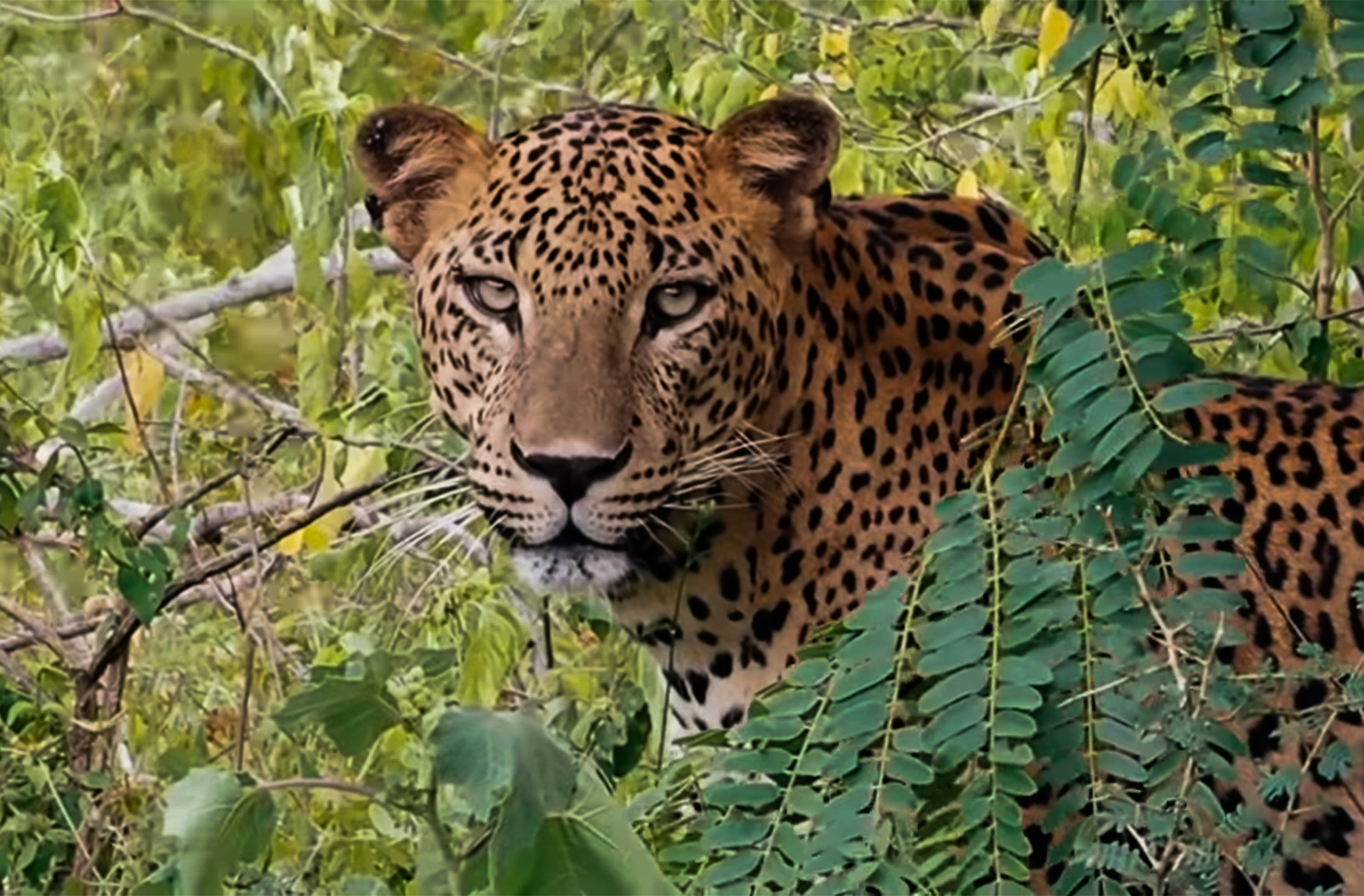 Sri Lanka wildlife has been considered as a maximum popular flora and fauna destination. It has a lot of many huge safari country wildparks. full of adventure and splendor. every and each national park has its personal strong point.

Habarana is a large village strategically placed at the center of crossroads on the primary route to the North and East of Sri Lanka.

Being almost of equal distance between Polonnaruwa, Anuradhapura, and Dambulla (and close to Sigiriya and Ritigala too) it is the ideal base to explore the major sites in the Cultural Triangle – or as a stopover on the journey to Jaffna or Trincomalee. It is also the easiest starting point for excursions to elephant watching at Minneriya and Kaudulla national parks. The main attractions of the village itself are the elephant rides offered by many operators and village tours which give an insight into rural life; the tranquil Habarana Lake also offers a pleasant scenic walk around its perimeter.

This national park is situated between Polonnaruwa, Habarana and spreads across about 8890 hectares. The elephants that travel from Kaudulla to Wasgamuwa can be seen here making it one of the most ideal parks to see wild elephants in Sri Lanka. There are over 200-300 Asian elephants here. The best time to see them is during the dry season which stretches from June to September.

There is an event known as ‘the gathering’ which refers to the annual meeting of a large number of elephants and this is the largest grouping of Asian elephants at any given time. They gather at the Minneriya Tank which was built by King Mahasen to drink water, bathe and even find mates. It is an amazing spectacle if one is lucky enough to see it. There are safari’s available throughout the year which takes you around the park to see these magnificent creatures. There are other creatures that can be seen such as the sloth bear, red-lipped lizard, macaque monkeys and leopards to name but a few.

Situated in the arid South East region of Sri Lanka, ala National Park is home to the greatest variety of the nation’s wildlife and therefore, its most popular wildlife destination.

Declared a Game Reserve in 1938, Yala comprises five blocks covering an area of 151,778 hectares. The park comprises several major habitat types – dunes, scrub forest, riverine forests, rocky out-crops, secondary forests and coastal lagoons with mangrove forests which are home to a wide variety of wildlife. The 44 mammal species found here include the endangered leopard sub-species Panthera pardus kotiya, which found only in Sri Lanka. Yala is also known to contain the highest Leopard concentration in the world. Other ‘big game’ such as sloth bear, herds of elephants, buffalo, sambar, spotted deer, and crocodiles are also found in great numbers. The dry months from May to September are the best times for viewing them. With over 200 species of birds, Yala is a hotspot for birders too. From October to April during the Northern Hemisphere winters, Yala becomes home to many species of migrants and the salt pans at Palatupana are a popular location for bird watching. Yala’s historical significance dates back to 500 B.C and evidence shows that the park was inhabited in the past. There are many archaeological sites within the park and the ancient monastery of Sithulpahuwa standing sedately on an isolated rocky platform is a popular pilgrimage site.

It covers about 131,000 hectares stretching from the northwest coast to the north-central province and comprises a complex of lakes called ‘Villus’ surrounded by grassy plains, set within the scrub jungle. Although the biggest attraction at Wilpattu is the elusive Leopard, all of the `big game’ in Sri Lanka including elephant, sloth bear, water buffalo, and spotted deer are found in abundance here. Being less accessible than the other national parks, Wilpattu remains unspoiled and uncrowded – a haven frequented by true nature lovers. The extensive park consists of varying habitats: coastal belt, natural lakes (villus), cliff tops, scrublands, open grasslands, and dense forest. While this diversity houses many mammal and reptile species, Wilpattu is also famed for its birdlife – primarily endemics. The coastal belt and natural lakes attract many waders and migrant species too. Apart from its wildlife, Wilpattu and its surroundings have great historical significance too – it is believed that in 543 BC Vijaya who departed from the country arrived here from India.

While it is one of the best places to see elephants all year round, it is also home to a variety of other wildlife including the Spotted Deer, Sambar, and Golden Jackal. It is not uncommon to see Mugger Crocodiles lurking in the waters or sunning themselves on the banks of water holes within the park. If in luck, you may even be treated to a rare sighting of a Leopard, Sloth Bear or the Slender Loris. Bird enthusiasts, you are in luck too, as Wasgamuwa National Park is home to a variety of endemic birds.

Apart from the many natural wonders, Wasgamuwa National Park has to offer, there are some historical ruins which can be visited including the ruins of the Chulangani chaitya which was built by King Mahanaga and boasts a circumference greater than the magnificent Ruwanweliseya in Anuradhapura. Other ancient ruins such as the Malagamuwa, Wilmitiya and Dasthota irrigation tanks as well as the Kalinga Yoda Ela canal which was built by King Parakramabahu I can be seen within the boundaries of the park.

Lying on the boundaries of the Sabaragamuwa and Uva provinces, the Udawalawe National Park is home to large herds of Sri Lanka’s largest land mammal, the majestic Asian Elephant. Sightings of elephants are very common here, so much so that you are likely to be treated to a few chances encounters just driving past the boundaries of the park. The park gets its name from the Walawe Reservoir which was built using the waters of the Walawe River, one of Sri Lanka’s major rivers. The park landscape is a mixture of abandoned teak plantations, grasslands and scrub jungle and is also an ideal location for bird enthusiasts as well. Other animals to be seen include the Water Buffalo, Sambar, Monkeys and if you are in luck maybe even a rare sighting of an elusive Leopard.

Maduru Oya National Park designated a national park in 1983. Established under the Mahaweli development project, Maduru Oya National Park is designed to protect the immediate catchments of five reservoirs developed under the Accelerated Mahaweli Development Programme. Providing a refuge for a wide variety of wildlife, the park is best known for its herds of the Asian elephants.

The most dominant physical feature of Maduru Oya National Park is the 8km long range of rocky mountains found towards the south-west of the park. The characteristic red soil which covers the entirety of this 58,850-hectare area supports a variety of dry-zone vegetation, with the climax community of the area being a tropical dry mixed evergreen forest.

The park is particularly important for its rich wildlife, which includes a variety of endemic species. Mammals to be found within the park include, but are not limited to, Asian elephant, sloth bear, leopard, and water buffalo. As with many of Sri Lanka’s water dominated parks, Maduru Oya enjoys a rich aquatic avifauna with a painted stork, white-bellied sea-eagle and grey pelican all present. Noteworthy forest-dwelling birds found here include the common tailor-bird, shama, and black hooded oriole.

Gal Oya National Park in Sri Lanka was established in 1954. It encompasses the country’s largest inland body of water, the Senanayake Samudraya Lake,

Three important herbs of the Ayurveda medicine, Triphala, Terminalia chebula, Terminalia bellirica, and Emblica Officinalis are amongst the notable flora of the forest. From 1954 to 1965 the park was administrated by the Gal Oya Development Board until the Department of Wildlife Conservation took over administration. The national park is situated 314 km (195 mi) from Colombo.

the largest reservoir in Sri Lanka. Gal Oya is the only place in Sri Lanka where safaris can be conducted by boat. It gives a unique and special perspective whilst watching animals as they come to the water’s edge to drink and forage along the shore. Many small islands providing one of the best places in the world to see the Asian elephant in its natural habitat, and one of the highlights is seeing wild elephants swim from island to island.

Kaudulla National Park has located off the main Habarana – Trincomalee road in the ancient cities’ area (Cultural Triangle) and 197 kilometers from the Colombo. It was designated a national park on April 1, 2002, becoming the 15th such area on the island. In the 2004–2005 season more than 10,000 people visited the National Park along with Minneriya and Girithale BirdLife International have identified Kaudulla as an Important Bird Area.

The park is centered on the ancient Kaudulla Tank (reservoir) and is home to up to 250 Elephants, Leopard, Fishing cat, Sloth bear, Sambar deer, and the endangered Rusty-spotted the cat.

Historically Kaudulla was one of the 16 irrigation tanks built by King Mahasen. Following a period of abandonment, it was reconstructed in 1959. It now attracts and supports a variety of plant and animal life, including large mammals, fish, and reptiles.

Situated around the ancient Kaudulla tank, the national park provides a 6656-hectare elephant corridor between Somawathie Chaitiya and Minneriya National Parks. The best time to visit the park is between August and December.

With fantastic opportunities to see many elephants at close range, the park has become a popular destination for wildlife safaris that also take in leopards, sambar deer, and the occasional sloth bear. As an additional novelty, you can go for cameraman rides on the tank.

Lahugala National Park was declared a national park on 1 October 1980 and is one of the smallest national parks in Sri Lanka. Despite its land area, the park is considered as an important habitat for Sri Lankan elephants

The national park contains the reservoirs of Lahugala, Kitulana, and Sengamuwa and they are ultimately emptying to Heda Oya river.

The park is best known for its elephants: up to 150 congregate around the tank during July and August, when the rest of Lahugala’s waters dry up, to drink and feed on the beru grass which grows prolifically around the water. The tank is also good for spotting a wide range of aquatic birds, including innumerable snowy white egrets that can often be seen hitching a ride on the backs of obliging elephants. When the rains come the elephants disperse, and large sections of the park turn a brilliant, post-monsoonal green.

The park serves as a link between the Yala Protected Area Complex on its east and Udawalawe National Park to its west and facilitates the ranging of elephants to and from areas such as Haldummulla and Koslanda in Uva and the southern region of Sri Lanka.

Lunugamvehera National Park in Sri Lanka was declared in 1995, with the intention of protecting the catchment area of the Lunugamvehera reservoir and wildlife of the area. The national park is an important habitat for water birds and elephants. The catchment area is vital to maintain the water levels of the five tanks in the down stream of Kirindi Oya and wetland characteristics of Bundala National Park.